From electric vehicles to solar energy and water reclamation, San Diego’s rapidly growing green economy is creating middle-class career opportunities for electricians who are members of the International Brotherhood of Electrical Workers Local 569 in San Diego.

By now, the term “green job” is nothing new.  Generally defined as a new or existing job that reduces polluting greenhouse gas emissions, green jobs have sprung up in almost every economic sector including construction, janitorial services and waste management.  What often gets left out in the public debate about the green economy however is job quality. Is the green economy creating good jobs that pay well, have family healthcare, skilled training opportunities and pension retirement?

Now that several green projects are in full swing in San Diego, the answer is clear: it is possible for green jobs to be high-road union jobs that are a win-win for local workers, businesses and consumers.  Here’s a look at three high-profile projects in San Diego County that demonstrate how cutting-edge technology, skilled training and targeted public investments are leading to community solutions that are both economically and environmentally sustainable:

RENEWABLE ENERGY:  SAN DIEGO COUNTY WATER AUTHORITY SOLAR PROJECT
San Diego leads the nation as one of the most popular cities for solar energy. Now, the San Diego County Water Authority is getting in on the action. By adding a half-megawatt of solar power to the Kearny Mesa office, SDCWA is lowering electric bills, creating jobs for IBEW 569 members and reducing the District’s carbon footprint.

RECLAIMED WATER: CITY OF SAN DIEGO’S WATER RECLAMATION PROJECT
With the dual challenges of population shifts and climate change, water in the western U.S. is already shaping up to be the environmental, economic and public health issue of the 21st Century.  As the last stop on the Colorado River, San Diego is competing with Denver, Phoenix, Las Vegas and other western cities for increasingly limited water. Fortunately, there is a solution. Water reclamation can create jobs, provide clean water and prevent wastewater from being dumped into the ocean, 200 million gallons a day in San Diego alone.   The City of San Diego is exploring the benefits of recycled water with the construction of a new water reclamation facility at the current Miramar Treatment Plant. The new plant, being built by IBEW 569 members, will allow one million gallons of water per day to be treated for re-use, providing a needed resource and decreasing coastal pollution from discharged wastewater.

CLEAN TRANSPORTATION: ELECTRIC VEHICLE CHARGING STATIONS
Securing energy independence, combating climate change and creating jobs are just a few of the reasons why electric vehicles (EV) are high on the radar screen for elected leaders, consumers and IBEW Local 569. In order to gear up for millions of electric vehicles, communities will need a network of electric car charging stations in homes and public places.  As one of ten cities nationwide chosen for the Department of Energy’s “EV Project,” EV charging units are already being installed throughout the County, putting IBEW 569 members to work and making San Diego a frontrunner in the low-carbon future.

For pictures and video of BEW 569 members in action on these and other green projects in the region, please visit www.ibew569.org.  You can also follow IBEW 569’s “green” news on Facebook and Twitter. 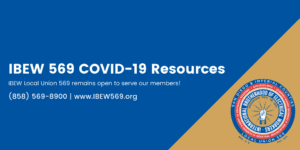