We mourn the passing of IBEW 569 Brother Thomas Spielman, who passed just seven days before his 85th birthday, in December.  Brother Spielman had been a Local 569 member close to 59 years.

Barely a year after high school graduation, Tom chose to join the Air Force, and served for five years.  During the last year of his service, he was allowed to work, as a civilian, for Sears & Roebuck, where he was a wholesale clerk.  By July 1960, Tom had secured a job at our Union shop, Ets Hokin & Galvan, as a truck driver.  He drove trucks for a year, and then saw the opportunity of the Marine Helper position at Ets.   In those days, it was not unusual for an applicant to work for over 1½ years, before being scheduled for Obligation into our Local.

By January 1964, he passed his Journeyman Marine Exam.  By this time, Tom had moved on to CALEWO, and then to Pacific Ordnance (now know as L3 Harris).  In late 1969, Tom decided to try his hand in our neon division, by going to work at Medford Neon.  After a year, he branched out to the Inside Wireman arena, and was dispatched to CALEWO as a Wireman PE.  Now, in the 70s, members who worked as journeyman wiremen, could segue from shops as Barham, Van Der Linden, Hamilton, and Schwarz, to SDG&E, and then back to Universal, Amber Electric, Morrow-Meadows, and Baker Electric.  Tom gifted himself with a Journeyman Wireman classification, by taking and passing his JW exam in December 1975.  By the 1980s, Bechtel supplied a great deal of our Local’s work, and Tom would take several dispatches there, both long and short-term.   In between Bechtel gigs, he’d fit in stints at Newbery, Neal Electric, Ebasco, Interstate, and Steiny & Co.  Tom retired in 1993. 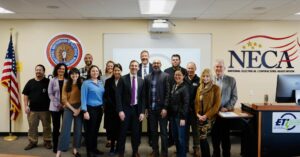