We mourn the passing of Retired Journeyman Inside Wireman John Patrick O’Hara, who was 73 years old, and had been a Local 569 member for over 47 years.

John had the “luck of the Irish”, when he entered Local 569’s inside wireman’s apprenticeship program (in 1972), for he was barely under the age of 26 (in those days, there was an upper age limit for apprentice applicants).  During his apprenticeship, John learned the trade working for Oliver Electric, Schwarz Electric, American Electric, Schuman, Fischbach & Moore, and CALEWO.  As a Journeyman, John was dispatched to:  Bechtel (7 times) 1976 – 1995, S.D.G.&E. (twice), Bob Van Der Linden, Morrow-Meadows (4 times), (still-Union) Bergelectric in the 80s (3 times), Davies Electric (5 times).  He would then spend the next several years working for Edlen, GES, and Freeman.  John worked for Freeman, as a Foreman, for the last five years of his career, ending in mid-2017.

For several years, John literally ‘brightened’ our office every December, as he brought a beautiful poinsettia plant for each one of the secretaries.  John’s picture (above) is from the 80s, when our members wore photo badges “on the job”, as part of our Local Union’s ‘campaign’ to gain consumer confidence, for their decision to hire “Union”.  This is how we, the Local staff, will always remember John, more ready with a smile than with a frown.  We will truly miss him.

A public service will be held on Mon., July 8th, at 12:30 pm, at the Miramar National Cemetery, located at 5795 Nobel Drive, San Diego, 92122. Please note, if you wish to partake, you must be “in line” with your car, meaning Lane 2 at that location by or before Noon. Then, at the appointed time, cemetery personnel will lead the line of cars to the memorial staging area. 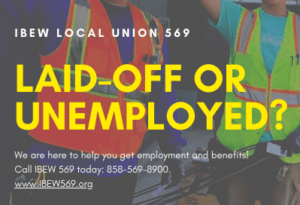 Laid Off or Unemployed? 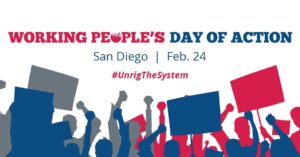 Join the Working People's Day of Action in San Diego on Feb. 24th!