In 1967, when Ray was just 19, he began as an Apprentice Inside Wireman at California Electric Works (CALEWO).  He would learn his craft at various shops:  Schwarz, (then-Union) Bergelectric, Southern Contracting, Atlantic, Capitol, Goodwin, Foshay, Universal, and Becker.

Our staff will remember him as an easy-going and kind member, just as his father before him, Ray R. Thomas, Sr.  We miss them both.

Please read the loving tribute from his family:  https://www.californiafuneralalternatives.com/obituary/Ray-ThomasJr 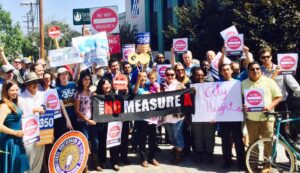 NO WAY on Measure A!