Passing of Brothers Michael J. McCutcheon and Clyde A. Bierly

His early formative years were spent in Detroit, Michigan, and by the early 60s, Mike knew he wanted to be in California, San Diego, specifically. He enrolled at San Diego City College, and by June 1965, he had begun our Apprenticeship program (at City College) and began working at Fischbach & Moore. He continued to hone his apprenticeship skills at Universal, American Contractors, and at California Electric Works (CALEWO). Mike graduated as a Journeyman Wireman in February 1969. He would spend the next 28 years at Fischbach & Moore, Oliver, Siegel, Warner, Taber Electric, Walton, Warner, Foshay, Amelco, and Neal Electric. Throughout his career, he would work as a foreman for several of his employers. By late 1974, Mike and Gil Catton (member of Local 441) decided to “go into business”, and the Catton & McCutcheon shop was ‘born’. Unfortunately, in the mid-80s, the work picture (even nationwide) was much worse than recently experienced (2007 – 2013). Eventually, Catton & McCutcheon closed, and Mike went back to Amelco. He completed his career at Neal Electric, and by the time he left, Mike had been elevated to a Superintendent. His family stated that he enjoyed traveling to all the continents, and unfortunately died in an accident while rafting in Iceland.

Services will be at 2 PM, on Sunday, August 20, 2017, at the El Camino Memorial Park, in the Chapel adjacent to the parking lot.

We remember him as having a quick wit, fun sense of humor, a big smile, and always a pleasure to assist with whatever brought him to the Hall.

Services were held on July 26th at 10:00 am at Featheringill Mortuary in El Cajon. 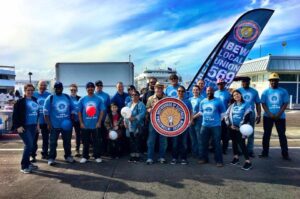