U.S. Senator Barbara Boxer remarked, “As a Chairman of the Environment and Public Works, I am pleased to know that the International Brotherhood of Electrical Workers Local 569 and the National Electrical Contractors Association are working together to train Imperial County’s workforce to fill clean energy jobs in Imperial County. People will not only learn important job skills, but will help to create new, clean energy technologies that will create economic growth. I applaud IBEW and NECA on your leadership.”

Congressman Bob Filner noted, “I am thrilled to see IBEW Local 569-NECA opening a Training Facility here in Imperial County. This is a win-win for working people, the local community and green energy businesses. As the green economy ushers in new career opportunities, I am working to ensure we are creating good jobs with healthcare, skilled training and benefits here in Imperial County. IBEW Local 569 will be a great partner in that endeavor.”

The leader of the State Assembly Economic Recovery Task Force, Assemblymember Manuel Perez commented, “As billions of dollars in stimulus funds flow into the state of California and make their way to Imperial County, we need to ensure we are maximizing opportunities for career pathways out of poverty and long-term local job creation. IBEW Local 569, NECA and the skilled trades are essential in that effort. This new Electrical Training Center is a true asset as we prepare a skilled workforce to meet the exciting challenges of the green energy economy here in Imperial County.”

IBEW Local 569 Business Manager Al Shur stated, “IBEW Local 569 is proud to be the first skilled trade to operate a training facility in Imperial County. More than ever, we are committed to growing a trained, local workforce and creating careers that pay well and have healthcare and benefits. From standard electrical work to energy efficiency retrofits and solar, our members are ready.”

Andrew Berg of the San Diego Chapter of NECA remarked, “IBEW Local 569-NECA’s apprenticeship program develops the best quality people in the industry, giving our contractors the competitive edge. We look forward to accelerating the growth of a robust green economy by adding new NECA contractors here in Imperial County.”

Formed in 1901, NECA is the voice of the $100 billion industry responsible for bringing electrical power, lighting, and communications to buildings and communities across the United States. The San Diego Chapter of NECA was chartered in 1942 and today represents over 100 electrical contractors. 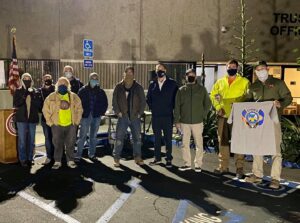 IBEW 569 and NECA Investment in Imperial County to Surpass $1.3 Million