Jeremy Abrams, IBEW 569 Business Manager, Card Number A129528, with some additional important updates for our members and union.

Hello IBEW 569 Brothers and Sisters – Jeremy Abrams, your business manager, Card Number A129528, with some more important updates for our members and union.

Let’s get out of the way, some bad news. Earlier this month, the House of Representatives voted on the next stimulus bill known as the HEROES Act.

While we agree with much of the bill and know that America needs help to get through this pandemic and economic crisis, we are angry that buried within the bill is the GROW Act.

The ‘‘GROW Act’’ allows for multi-employer pension funds to switch to what’s called a Composite Fund – that is neither a defined benefit plan nor a defined contribution plan.

As our IBEW International President Lonnie Stephenson pointed out:

Composite plans would undermine the retirement security of our union members and further destabilize the multiemployer system.

Composite plans would allow trustees from a healthy existing plan to create a new composite plan that would provide inferior benefits.

Workers and retirees would be subject to dramatic cuts in times of economic downturn, such as the one our nation is currently facing.

We activated our Retirees Club and put out an Action Alert for our members to call Congress to asked them to WEED OUT the GROW ACT from the HEROES ACT.

I thank all of our members that took action to call congress. Unfortunately, Congress passed the HEROES ACT with the GROW ACT still included.  We won’t forget that our members were put on the sideline on this matter.

And its unsettling that labor is divided on this issue. For every union that stands with us in opposition to the GROW Act, like our brothers and sisters at the Teamsters, there are other unions that support it – perhaps because they thought they could use a cheap composite plan as an organizing tool to have more contractors become signatory.  This hurts their members and their retirement plans, hence why IBEW is strongly opposed to the GROW Act.

There’s a small silver lining in that the HEROES Act will now be debated in the Senate starting June 1st, and we’ll be asking our members to contact our Senators to again say Weed OUT the GROW Act.

In other news, we got some great news last week. Grossmont Cuyamaca Community College voted to add two more big construction projects to our PLA, also known as a Community Benefits Agreement.

Through this Local Hire measure, Building Trades members, especially those living in East County, can look forward to building:

We extend our gratitude and appreciation for the Board continuing to partner with the Building Trades and invest taxpayer dollars into policies that create good-paying local jobs.

Finally, I would like to update you to the extent possible on our negotiations.

As you are aware, our contract expires on May 31st.

And, IBEW 569 has negotiated a contract extension with NECA from June 1st to August 31st to ensure all terms and conditions of our current contract, including wages and benefits, remain in full force until we can bring a contract back to the membership for you to vote on.

Steps in the negotiation process has been affected by COVID-19, much like your jobsites.

However, we continue to meet in person at the Training Center with social distancing, and continue to negotiate in good faith, and we will continue our fight for better wages and benefits.

Membership will be notified immediately once our Negotiation Committee has a draft contract for your review, consideration, and vote.

If you have any questions or concerns, please contact us at the Hall – we are here for you. Our number is 858-569-8900 and the contact information for all staff members is listed on our website.

In closing, thank you for everything you are doing to keep our union strong. We will get through this together. 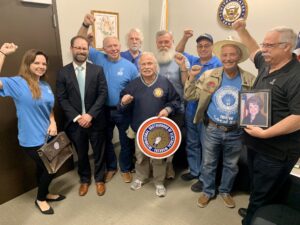 Protect Our Pensions – Weed Out the GROW Act!