We mourn the passing of Brother Roger Halama.  He passed on March 5th, was 81 years old, and had been a Local 569 member for over 57 years.

Born in Wisconsin, Roger and his family moved to San Diego just in time for him to spend all his high school years at Hoover High, graduating in 1955.  For the next several years, Roger worked as a gas station attendant, an auto mechanic, installer of A/C at North Island for 2 years, and worked  as a Hand Former and Router Operator at Rohr Aircraft.   By the time he turned 23 years old, he walked into Local 569 and completed an application for the Electrical Apprenticeship Program.  At the time, applicants were requested to state the reason(s) for applying to the electrical apprenticeship.  Roger’s response:  “I want a good trade with a future.”   His “future” included working for Federal Electric, Baker, Capitol, Fluor, and Ets-Hokin & Galvan during his apprenticeship, and he graduated to Journeyman level in January 1966.

Throughout his 30-year career as a Journeyman, Roger would work at Baker (3 times), Amelco (3 times), Bechtel (twice), Foshay, Arcon, Steiny & Co., Owl-Dynalectric (and later as Dynalectric), Endeavor, and Fuller (where he’d spend almost 3 years).  Roger also worked as a Foreman at Universal Electric from 1976 – 1978, and as a Foreman for (then Union) Bergelectric from 1978 – 1981.  His last dispatch was to Lockard Electric, in 1995, and he retired in 1998.  In retirement, “Roj” enjoyed the same activities as he had during his work life:  off-roading in his custom Jeep, visiting friends, leatherworking, and gun collecting.   His daughter, Dawna, described him as being “gregarious and well-liked”.  That he was, for there was such a laidback way about him,  one felt at ease within moments of meeting him.  He will be missed.

Decline to Sign DeMaio's Petition – It Takes Away Our Jobs! 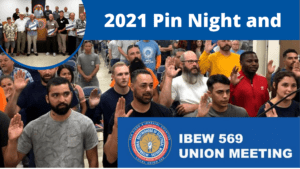