We mourn the passing of Retired Journeyman Inside Wireman Kenneth (Kenny) R. Johnson, who passed on February 28th. He was 83 years old, and had been a Local 569 and IBEW member for over 66½ years. That’s not a “typo”, for Kenny wasn’t even 16½ years old, when he obligated into Local 447, in El Centro (at the time, the Imperial Valley had its own Local). (The minimum apprenticeship age of 18 wouldn’t take effect until approximately the mid-60s.)

Over his long career with Local 447, Kenny progressed from being a beginner Apprentice Inside Wireman to becoming its Business Manager. By the mid to late 70s, he was ‘tapped’ by the IBEW to become IBEW’s 9th District Vice-President, and he served for several years in the position. As International Office (I.O.) Rep, Kenny was no stranger to our office staff. When he came to ‘visit’, he always had an easy-going manner and a warm smile. And every time, his greeting was the same, “Good morning. I’m from the I.O., and I’m here to help.” It was the way he said that phrase, and every time, it made us laugh (in a good way). And, of course, he was always able to help with whatever situation that required his/the I.O.’s attention. Perhaps his tall (larger than life) presence “encouraged” contractors to eventually “see the light”. Kenny was residing in a suburb of Los Angeles, at the time of his passing.

Point of Info: the June Electrical Worker publication will have many more in-depth recollections about Kenny, from his daughter to former colleagues (including members of Local 569). The journal should be in the mail sometime around the end of May. This issue will also be featured on the IBEW website around that time (probably between May 31 and June 4).

We mourn the passing of Retired Streetlight Technician Jésus Guerrero, who passed on March 10, 2019. He was 72 years old, and had been a Local 569 member (most recently) for over 26 years.

Even before becoming a Local 569 member, in late 1987, Jésus had already worked for two of Local 569’s shops, Arrow Electric, then Don’s Backhoe Rentals, but not within a Union classification. His first shop with the Union was Amelco, where he stayed for over a year. Then he would work at Saturn Electric, and then Steiny & Co. Between late 1990 and 1999, depending on the work availability in the industry, Jésus (not one to let “moss grow”) went back and forth between the two trades in which he excelled, carpentry and streetlighting. In between his carpentry work periods, he’d spend over 2 continuous years with Select Electric. When Jésus finally returned to Local 569 (for good), he would work for Select, Dynalectric (2 separate dispatches), Sierra Electric, Saturn Electric, and “rounded out” his career at Select Electric, spending almost another year at his “home” shop. Jésus retired in 2012. When he would come into the Hall to pay his dues, he had slightly gruff manner, and a dry sense of humor. He was memorable, in a low-key way, and he’ll be missed.

Brother Dean was born in Porter, Oklahoma. By 1953, the enterprising 19-yr. old began his IBEW career as an Apprentice Inside Wireman, in Local 952 (Ventura, CA). In late 1972, he traveled down to San Diego, and was dispatched to Telco, which would soon become Sierra Pacific. By 1976, Bechtel Corporation was hiring (like nobody’s business!), and John was dispatched, where he would stay for the next seven years. There was a (work) life after Bechtel, and John would be dispatched to Locke Electric, Baker Electric (3 times), L. K. Comstock, Salmons & Chappell, and then wound up his career at Vantage Electric. Brother Dean retired, on disability, in 1993. He always kept his noticeable Southern drawl and gentlemanly manner. And whenever he’d come into the Hall to pay his dues, on many occasions, he would wear his signature cowboy hat. Brother John will be missed. 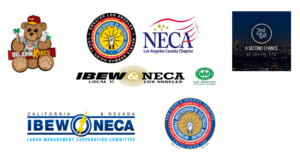