We mourn the passing of Brother Bill Nordberg, Retired Journeyman Inside Wireman, who passed on December 19th. Brother Nordberg was 71 years old, and had been a member of Local 569 and the IBEW for over 46½ years. He first joined Local 465, in 1971. Within two years, Bill came to realize that Local 569’s apprenticeship program was the better opportunity for him, and he entered Local 569’s program on September 1, 1973, with his dispatch to Vanderlinden Electric. For the 36+ years that he worked through Local 569, the contractors were happy with him and his work ethic, as evidenced by the number of times that he was dispatched to each of the following shops: Vanderlinden (4), Bechtel (5), Baker Electric (8), Southern Contracting (2), and G. O. Green (2). Even now, I can still hear him say, “And they’ll (the contractors) keep hiring me until I get it right.” Bill was always upbeat, and he left a person happier by being in his presence.

Please note Celebration of Life details in the obituary below:

Bill Louis Nordberg December 1, 1946 – December 19, 2017 Oceanside Bill Nordberg, known affectionately by many as “Mr. Bill,” passed away at home in Oceanside on December 19, 2017. Bill was born in Minneapolis, Minnesota, but spent nearly his entire life as a proud Oceanside resident. He graduated from Oceanside High School in 1964 and served in the Army as a military policeman before joining the International Brotherhood of Electrical Workers in 1971. As a member of IBEW Local 569 for nearly 47 years, Bill spent much of his career mentoring others as a journeyman electrician. He was an avid outdoorsman, participating in mountain man re-enactment camps and honing his marksmanship in hunting, shooting and archery. He is survived by his daughter, Tiffany Halpin of Carlsbad and her husband Zachary, and sister Wynn Degen of Jamul, her husband Denis and their family. To know Bill was to love him, and he was known by many. A celebration of his life will be held on the lanai at the Oceanside Broiler on Saturday, January 20th from 11am-2pm. Hawaiian shirts and memories are welcome. In lieu of flowers, donations may be made in his name to the Wounded Warrior Project.

We mourn the passing of Brother Harold Wagner, Retired Journeyman Inside Wireman, who passed on January 2nd. He was 85 years old, and had been a member of Local 569 and the I.B.E.W. for over 61 years. Brother Wagner joined Local 465 in July 1956. By December of that year, he noticed the “greener pastures” that was the booming shipyard work of Local 569, which would last throughout the following decade, as well. Harold began as a Marine Helper at NASSCO. In those years, the logical progression was to become an Apprentice Marine, which he did. Harold honed his craft by being dispatched to Ets Hokin & Galvan (7 times), then secured more experience at Fischbach & Moore, as well as Campbell Machines (before it became Campbell [shipyard] Industries.) By early 1962, Harold passed his Journeyman Marine exam. When the mid-60s arrived, Harold could see even the better opportunities one would have by working for Local 569’s construction electrical contractors. During the 60s and 70s, if one had attained the Journeyman level at the shipyard(s), one could not only sign JW Book 3, one could also request the Journeyman Inside Wireman’s exam. After Harold had gained some commercial construction experience at Becker Electric, Bell Electric, and S & M, Harold took and passed his Journeyman Wireman’s exam, in January 1966. Throughout his career, he would return to Bell Electric (5 times), and also was dispatched to A.W. Myers (twice), Bechtel (twice), El Cajon Electric (4 times), Chula Vista (twice), Ascot Electric (twice), as well as securing a variety of experience through: Foshay, Endeavor, Oliver, Stringer, Wyatt, La Mesa, Southland, and Interstate. He is survived by his wife, Pauline. 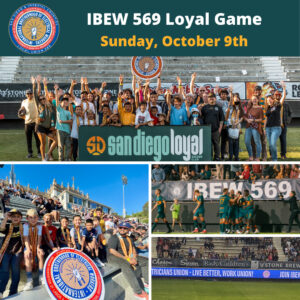