We mourn the passing of Retired Journeyman Inside Wireman Steven M. Casas, who passed on March 25th, and was 67 years old. Brother Casas had been a member of Local 569 and the I.B.E.W. for an accumulated total of over 43 years.

Born in Brawley, CA, and after graduating from Centro High, in El Centro, he headed to Oregon Tech, in Salem Oregon, where he’d complete a program of study. From 1972 – 1981, Steve learned and honed his craft at Hinson Electric, then Central Electric. During his employment at Central Electric, in 1973, he initiated into Local 447 (El Centro). Steve was employed at Atkinson Electric, when Local 447 amalgamated with Local 569, in 1980. Over the next 26½ years, Steve would be dispatched to: Bechtel (twice), So. Contracting (3 times), Saturn Electric (twice), Fuller Electric (7 times), Baker Electric (6 times), Supreme Electric (5 times), as well as dispatches to Morrow-Meadows (twice), L. K. Comstock, Owl Electric (before Dynalectric), Steiny & Co., and Robinson. Along the way, Steve would be dispatched as a Foreman for the following contractors: Mission Gate, Supreme, and 5-Star Electric. Steve’s last contractor was Robinson Electric, for an Imperial Valley job, in late 2006. His disability pension became effective October 2009.

Imperial Valley Local 569 members will remember that, for several years, Steve and his wife, Tammy, enjoyed giving their time and resources (not to mention cooking skills) to provide attendees at the annual Christmas Party (at our satellite office) with a festive holiday meal. Retired Journeyman Inside Wireman Dale Casas is Steve’s younger brother. A private arrangement was held in Imperial Valley. We will always remember our tall, kind Brother Casas, who would brighten our day, whenever he’d either call, or come into our office. 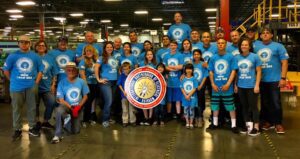 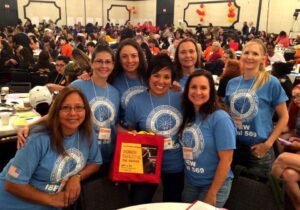 Attend the 4th Annual Women in the Trades Conference