We mourn the passing of Retired Journeyman Inside Wireman Brother Don R. Christian, who was 91 years old, and had been a Local 569 and IBEW member for over 66 years.

Brother Christian began working through Local 447 (El Centro) in 1952.  As was the practice of many Locals (including Local 569) during that era, Local 447 had him work for almost 2 years, before he was obligated into membership, in March 1954.  While a member of Local 447, he worked for the following contractors:  Bob Van Der Linden, Bush Electric, H.P. Foley, Burton, Bechtel Corp., Gibbs & Hill,  Kaiser Engineers, Capitol Elec., Mac Electric, Lemon Grove Electric, and Becker Electric.  By mid-1961, Don decided to transfer his membership to Local 569.

When he turned 65, Don became very active in the Over 65 Drivers stock car racing events, specifically for the “midget” cars.  He continued to ‘race’ for over 20 years, and he would drive to events hundreds of miles from his home base.  What a life!

PHQs for the SONGS/Stone & Webster upcoming outage. Your completed PHQ must be received at the Stone & Webster New-Hire Office no later than October 14, 2011 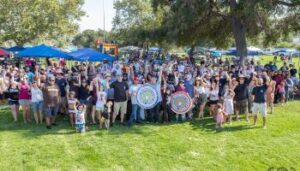