We mourn the passing of Brother Daryl Krewson, who died on August 31st.  He was 68 years old, and had been a member of Local 569 for over 42 years.

Although born in Camp LeJeune, North Carolina, Brother Krewson knew that he was destined to be in Southern California.  Right after graduating high school, Daryl enrolled in Palomar College, San Marcos, and completed two years.  By March 1977, Daryl was accepted into Local 569’s Wireman’s Apprenticeship program.  The classes were held at San Diego City College, since the JATC/ETI building wasn’t completed until the early 1980s.  Daryl learned his craft at Bice Electric, Southern Contracting, as well as Bechtel Units 2 & 3.  He graduated as a Journeyman in February 1981.  For the next 38 years, Daryl would work for Bechtel (7 dispatches) almost 15 years, then-Union Berg, Southern Contracting, Steiny & Company (2 dispatches), Stone & Webster (2 dispatches), Southland, GES, Freeman, and Edlen.  At our previous location on W. Washington Street, Daryl completed our Local’s organizing class:  Construction Organizing Membership Education Training (COMET).  For the next several years, Daryl’s completion certificate, along with the certificates of other like-educated members, lined the walls of the upstairs meeting Hall.  Daryl’s demeanor was quiet, yet affable, at the same time, and he was always a pleasure to assist, whether in person, or on the phone.  We will miss him. 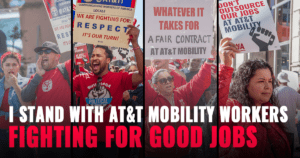