Today we mourn the passing of three IBEW 569 Retired Journeyman Wiremen: Clark W. Jones, Gene E. Sickels and Raymond Vorhies. Our thoughts and prayers are with them and their family members.

We mourn the passing of Retired J.W. Clark W. Jones, who was 89 years old, and who had been a member of Local 569 and the I.B.E.W. for exactly 66 years.  Brother Jones was an industrious young man, having begun his own electrical business at age 21, then joining Local 236 (Albany, NY) in May 1950, and becoming a Union contractor at age 23.   He contracted for the next 4 years, until he decide to serve his country, by joining the Army in 1954.  After his military stint, he would eventually make his way to San Diego.   Clark began working at Electrical Construction in 1957.  He’d work at CALEWO, and then again at Electrical Construction, before transferring to Local 569, in 1959.  Before retiring in 1982, Clark would work at such companies as: Fischbach & Moore, Standard, Chula Vista Electric, and S.D.G.& E.  He began working for Bechtel at San Onofre in 1976 during the height of construction, and he would stay there until he retired in 1982.  Family services have already been held.

We mourn the passing of Retired J.W. Gene E. Sickels (on May 20th), who was 74 years old, and who had  been a member of Local 569 for over 45 years.  Brother Sickels, an El Cajon Valley High School graduate, wasn’t quite 18 years old, when he joined the U.S. Air Force, in 1959.  He served for 4 years, specializing as an airborne radar and navigation equipment repairman, as well as a missile instrumentation technician.  Coming back to El Cajon, he began working at Mission Cable TV in 1965, and would stay there until mid-1969.  In May 1969, Local 569 dispatched Gene to his first Union job at Beach Electric.  As per the usual “M.O.” of the day, he was finally obligated as a member in late 1970.  Gene passed his J.W. exam in 1977, and he would work for a wide variety of ‘shops’ for the next 20 years, including: CALEWO, Bechtel (5 different dispatches), Dravo, Morrow-Meadows, Baker, Dynalectric, GES (known then as Greyhound Exposition Services), Davies, Domar, and Robinson, to name several.  Gene even worked as a Groundman for Comstock and Mass, in the 80s and 90s, respectively. He retired in May 1997, and as you can see by this photo of him, he loved to have an orderly garden.  (This photo was taken just 2 weeks before he passed.)

Gene will be interred at the Miramar National Cemetery on Wednesday, June 15th, at 10:30 am.

We mourn the passing of Retired J.W. Raymond Vorhies (on May 20, 2016), who was 86 years old, and who had been a Local 569 member for over 62 years.  Brother Vorhies was born in Rome, New York.  He moved to San Diego in the early 1950s to marry his wife of 64 years.  Brother Vorhies was a man of great faith and a family man.  He first job with Local 569 was at Ryan Aeronautical, in 1953.  Raymond would work his way “up the ranks”, by being dispatched to various electrical shops: Standard, Webb, Franks Electric, before he passed his J.W. exam in Dec. 1958.  Raymond would work at many different shops over the next 32 years, including: Foshay, Hardelco, CALEWO, Stringer, Karvon, Van Der Linden, Berg (when they were Union), Morrow-Meadows, Steiny & Co., Davies, Dynalectric, and Saturn.  He retired in 1993.  Raymond had a great sense of humor.  He would really brighten our day, when he’d come into the ‘old’ hall to either pay his dues, or secure important Union information.  The photo shows him (with his beloved wife) wearing his IBEW suspenders.  He was so very proud of being a union member.   His family has held a private service.

Holiday Thank You to Local 569 Members 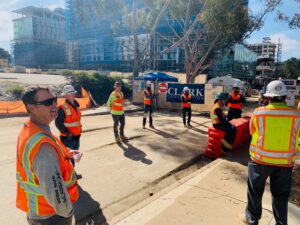