What’s new in the IBEW’s Political & Legislative Affairs Department and the halls of Congress?

Next week at long last we are likely to get a House vote on the Cadillac tax. IBEW members are strongly urged to contact their member of Congress to request their vote in favor of H.R. 748, the “Middle Class Health Benefits Tax Repeal Act.” This bi-partisan legislation would permanently repeal the 40-percent excise tax on employer-sponsored health insurance plans.

The tax was conceived to contain the cost of employer-sponsored health plans. In reality, for hardworking IBEW members, it’s making coverage less affordable. IBEW members are being forced to make concessions at the bargaining table in anticipation of the tax set to go into effect in 2022, leaving less money to pay for everyday needs.

The Middle Class Health Benefits Tax Repeal Act has nearly 360 co-sponsors and is widely supported by organized labor, business groups and consumer advocates. The IBEW urges every member of Congress to support the permanent repeal of the excise tax before it further harms working American families.

Please urge your member of Congress to vote for the bill when it comes up on the floor. If they are on this list of co-sponsors, please thank them for their continuing support.

A July 10 Capitol rally attended by members of the IBEW as well as other unions and members of Congress preceded a packed Ways and Means Committee vote on the Butch Lewis Act. Now this legislation to fix multiemployer pension plans – a priority for the IBEW – is on its way to the floor.

Known as the “Rehabilitation for Multiemployer Pensions Act,” (H.R. 397) in the House, the IBEW supports this legislation to provide low-interest, long-term loans to failing pension funds.

More co-sponsors will increase the likelihood of a House vote and the chance that the House and Senate can successfully negotiate an agreement before the 2020 election. Ask your member of Congress to co-sponsor the Rehabilitation for Multiemployer Pensions Act and request their support when it comes up for a vote on the floor. Click here for a list of the bill’s sponsors.

“I can think of no better date from our union’s long history for honoring the men and women who have been injured or killed on the job, and for celebrating the electrical workers who keep power flowing to customers all year round,” said IBEW International President Lonnie R. Stephenson.

The nation’s 75,000 electrical line workers were recognized with a proclamation and events on Capitol Hill, including a touch the utility truck event and an opportunity for members of Congress to learn about the trade.

A total of 109 members of Congress co-sponsored the bipartisan resolution, including Representative Donald Norcross (member of Folsom, N.J., Local 351). Here’s a list of co-sponsors of the resolution, H. Res. 478.

RAISING THE MINIMUM WAGE
Also next week, the “Raise the Wage Act,” (H.R. 582) is expected to come to the House floor for a vote. This legislation would:

The Raise the Wage Act will deliver long-overdue raises to more than 1 in 4 workers, according to the Economic Policy Institute, 90 percent of whom are over the age of 20. The average age of workers who would get a raise is 35. This bill has more than 200 co-sponsors. 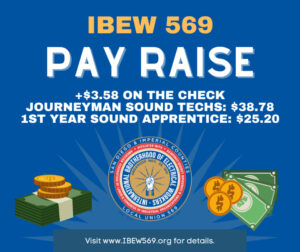 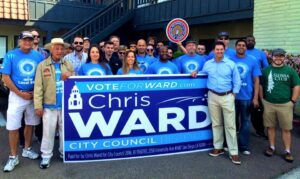