Submitted to and posted by the San Diego Union Tribune

Every day our officials fail to act, we further endanger global health and economic vitality.

Marquez is an environmental organizer with IBEW local 569, and lives in Ocean Beach.

The International Brotherhood of Electrical Workers Local 569 represents over 3,600 electricians, power professionals and working families in San Diego and Imperial Counties, and we have long advocated for a future that involves clean energy to help tackle the climate crisis. The need for urgent action on climate change is everywhere. We see it daily as our communities experience record-breaking heat, historic wildfires, dangerous droughts and more. We cannot ignore the increasing public health and economic threats to our state.

In California, prolonged heat spells and larger wildfires are fast becoming more common. According to Cal Fire, more than 8,000 fires this year alone have burned nearly 2.5 million acres statewide, nearly double the five-year year-to-date average. In addition to the serious respiratory health issues caused by the inhalation of smoke-filled air, wildfires cause millions of dollars in damages and cost significant resources to contain.

For those of us who live in San Diego County and across Southern California, we know the climate crisis has arrived. According to the San Diego Foundation’s Economic Resilience: Health report from 2016, San Diego County will have approximately seven times as many days of extreme heat by 2050 than the pre-2000 historical average. Beyond heat and wildfires, drought conditions are also worsening as rain and mountain snowpack have decreased drastically with the climate becoming hotter and drier. These drought conditions mean that all of us — families, property owners, business owners — may soon face difficult economic decisions about reduced water supplies.

The good news is that there are solutions provided in the Build Back Better Act and the bipartisan Infrastructure Investment and Jobs Act. Both of these bills not only counter the effects of climate change, but they will boost our local economy by creating new, good paying jobs in the clean energy sector. And as a union, those are two of our top priorities. These bills as currently drafted would increase the number of clean energy jobs with prevailing wages, while also reducing pollution that contributes to climate change. Both pieces of legislation make significant investments in renewable energy sources like solar, wind and geothermal — combined with good labor standards and expanded apprenticeship opportunities to train the next generation of electricians.

As the clean energy sector grows, it presents additional opportunities for electrical workers in the ever-growing space of advanced clean technologies, such as electrifying our transportation system. The future employment opportunities and economic benefits are significant, as there are provisions in the current version of the Build Back Better Act that offer specific tax benefits that reward clean energy innovation and manufacturing. Furthermore, it is estimated that about 85 percent to 90 percent of the infrastructure jobs that will be created in the Infrastructure Investment and Jobs Act and the Build Back Better Act do not require a college degree. It’s truly a blue-collar blueprint to revitalize our economy.

And while this kind of robust action to fight climate change and create jobs is clearly something our members support, it’s something most Californians — and most Americans — support, too. In fact, one recent poll showed 69 percent of Californians believe Congress must address the climate crisis by 2030, including 57 percent who say that is very important. Another poll showed 71 percent of likely national voters support making the investments in climate, justice and jobs that President Biden promised. The framework for the Build Back Better Act he announced last week would set the United States on a path to a 50 percent to 52 percent reduction in carbon pollution by 2030.

This framework and the bipartisan Infrastructure Investment and Jobs Act provide an opportunity to contain and mitigate the serious effects of climate change while also ensuring that the changes we make lead to economic growth. This is an ideal win-win opportunity to improve our health and safety while also generating good-paying jobs for San Diego area residents. Action is urgent as every day that our elected officials fail to act in bold, transformative ways on climate change, we lose time and only further endanger the health and economic vitality of San Diego, California and our nation as a whole. If we fail to respond to a warming planet, we know the outcome. In a word: It’s dire.

This is why I am encouraging our members of Congress to support significant investments in clean energy in the Build Back Better Act. The time is now to build a thriving future for San Diego that is powered by clean energy. 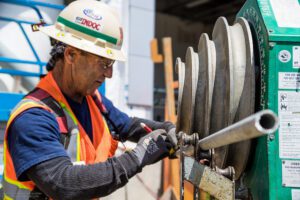 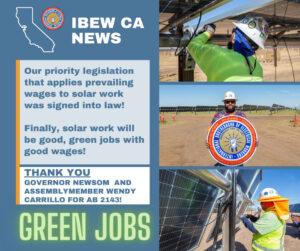 San Diego Electrical Workers Provide Service for Those Who Have Served