By now the world knows about the sexual assault allegations against Supreme Court nominee Judge Brett Kavanaugh and the ways in which his record both on and off the court should be troubling to everyone who believes in the equality and humanity of women in America.

What you might not know, however, and what has understandably garnered fewer headlines than the serious allegations of misconduct against Kavanaugh, is his disturbing record when it comes to working women and men in our country. The Senate Judiciary Committee has asked the White House to conduct an investigation before confirming his nomination, and the full Senate is poised to consider his appointment after that.

As a judge on U.S. Court of Appeals for the D.C. Circuit, the second highest court in the land, Kavanaugh has reliably put business profits before the rights and safety of American workers, as well as protections for consumers and the environment. In fact, the Trump administration, in nominating Kavanaugh, thought it was important to note that, as a judge, he undermined those bedrock protections 75 times.

Kavanaugh’s career started as a member of a tight-knit group of anti-union conservative operatives. From those roots, he was elevated to a federal judgeship, a lifetime appointment, in 2003. Nevertheless, he often finds himself arguing the opposite side of crucial cases against colleagues on the federal bench who were appointed by Republican presidents — because he’s that extreme.

In 2016, Kavanaugh declared the Consumer Financial Protection Bureau, and the 2010 Dodd-Frank law that created it, unconstitutional — a gift to a powerful financial industry chaffing under laws designed to protect middle-class investors and families. That decision was later overturned.

He has argued for voter identification requirements that disproportionately affect people with disabilities, older Americans, college students, and racial minorities. Kavanaugh has supported laws that manipulate electoral boundaries to favor one party over the other and disenfranchise voters of color. And, while limiting the ability of some Americans to participate in the political process, he has welcomed the influx of unlimited “dark money” donations into our election system.

He has also argued to limit the ability of the National Labor Relations Board to protect the interests of American workers, and sought to limit the ability of the Occupational Safety and Health Administration to protect worker safety. In that dissenting opinion, he argued that some people who face extreme physical dangers in their jobs don’t deserve the same federal safety protections as other workers because they go into those jobs knowing the risk.

Access to basic health care, the ability of workers to bargain in good faith for contracts that protect their rights and safety, protections for the environment and our community health, and a myriad of others issues affecting middle-class families will come before the U.S. Supreme Court in the near future and, indeed, during the many decades Judge Kavanaugh could potentially serve on the court thanks to a lifetime appointment. It’s important that we have a judge whom we can trust to be impartial and fair.

As shocking and disturbing as the headlines have been over the last several weeks, Kavanaugh’s disregard for the well-being of American workers is also alarming to me and others who work to protect their rights and safety. United States Supreme Court appointments last a lifetime. We shouldn’t have someone in that position who doesn’t consider workers’ basics rights and safety worth defending.

By Nick Segura, Business Manager of the International Brotherhood of Electrical Workers Local 569. 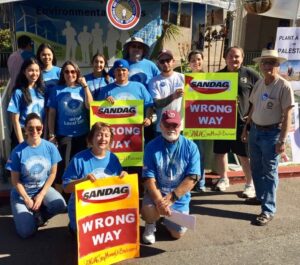