IBEW 569, Building and Construction Trade Unions, and our skilled and trained workforce stand strong to support local hire and local jobs, protect worker safety, create solid middle-class career paths, and deliver constructions projects that are on time and under budget.

The following State of the Union speech was given by IBEW 569 Business Manager Nicholas Segura at our Union Meeting on February 13, 2019.

Earlier this month, we heard the President of the United States deliver a State of the Union speech that largely left our working families and our interests out in the cold.

On one hand, he called for unity and peace, but on the other hand Trump threatened war on anyone that questioned him.

And as he tooted his own horn on job creation, Trump failed to recognize the reality of American families are facing – where more and more people are working multiple low wage jobs to make ends meet.  He also touted his tax cuts that have hugely benefited the wealthy and giant corporations at the expense of working families – for example, Trump eliminated the tax deduction for our union dues.

And our priority interest – a national infrastructure plan that literally rebuilds our nation – was a mere passing thought for the President.

“D+” – that’s the grade America’s crumbling infrastructure received in the latest Report Card.  We’ve waited over two years for Trump to come up with a real infrastructure plan and put our members to work – and this plan shouldn’t be paid for with kickbacks to corporations, or the privatization of our public infrastructure, or by taxing us to go to work.

The things we’ve been fighting hard for—more project labor agreements, more local-hire agreements, and better training and workplace safety—Trump is supporting none of these things.

Trump is saying things that on their face might sound good. But he hasn’t once solidified how he’s going to rebuild America and do so with prevailing wages, or local hire or project labor agreements or with our skilled and trained workforce.

So we will let Trump know that we won’t settle for bread crumbs to feed our families! Proving we’re stronger together when we stand up together.

As Stacey Abrams said in her rebuttal to Trump’s speech:

“We may come from different sides…but our joint commitment to the ideals of this nation cannot be negotiable. Our most urgent work is to realize Americans’ dreams of today and tomorrow, to carve a path to independence and prosperity that can last a lifetime.”

So tonight, we will have our own State of the Union – where we outline the state of IBEW Local Union 569, our priorities and goals, and light the way forward for our members and working families.

2018 was a year of immense progress for us and our members, and big work is on the horizon with new political and industry wins.

We have big work on the horizon – RIDA and the Chula Vista Convention Center will hopefully break ground late this year on one of our area’s largest construction projects, and we’re working to get more Project Labor Agreements to create local jobs and community benefits, including at local transit agencies like SANDAG and MTS.

Our new Intelligent Transportation Apprenticeship Program will greatly enhance projects with transportation agencies as the scope of work covers street lighting, traffic signals, and intelligent freeway systems. It is physically demanding work as the majority of conduit and wire is installed underground, requiring digging, boring, removal of street surface and restoration of street surface.

We’re also working on residential PLAs to regain this market share – and we were successful in working with the State Building Trades to ensure that new affordable housing developments pay prevailing wages.

Also on the work outlook – and due to your hard work during the election season – more than $4 BILLION of schools bonds under project labor agreements were approved by voters – this will put our members to work for many years to come on school retrofits and upgrades.

Last year, our membership worked and logged over 4.4 million hours – which is nearly half a million more hours than 2017.

And in 2018, we welcomed 364 new brothers and sisters to our union, and organized 23 shops.  IBEW 569 is standing strong with 3,188 members, of which 495 are apprentices and being trained to join you as the best in the electrical industry.

IBEW 569 is also known for giving back to our communities – through our efforts with Rebuilding Together to upgrade the electrical systems of wounded veterans and families in high need, or our contributions to the Labor Food & Toy Drive, and the annual Diaper Drive with Assemblymember Lorena Gonzalez.

And congratulations to our new clubs for member engagement – RENEW, the Retirees Club and United Sparkies all got chartered, and ALIANZA is off to a great start with their first ever Posada and voter registration drive – all groups are deepening our member engagement in our communities and union.

We also had the largest turnout for our election season, picnic, and Padres tailgate.

Also, we received a $3 million grant to build a new training facility in El Centro. The project is estimated to create 332 jobs and provide many more apprenticeship and training opportunities to community members.

It’s because of our collective community impact that others take notice and respect the IBEW – including when I was honored as the Labor Leader of the Year at the 36th Annual John S. Lyons Memorial Banquet.

Also, I spoke before the California Air Resources Board (also known as CARB) in favor of the Innovative Clean Transit Rule which will result in Clean Air, IBEW Jobs, and Climate Action! The Board voted in our favor. This means additional infrastructure will be built to charge electric buses and will put thousands of IBEW electricians to work.

Plus, Governor Brown signed legislation that puts California on track toward 100% clean energy by 2045. IBEW members have built more than 1,600 megawatts of clean energy since 2002, and we’re committed to strengthening our clean energy economy.

Plus, we were successful in killing a bill the jeopardized more than 100,000 IBEW jobs, and we killed a legislative proposal in Washington DC that would have decimated our pensions and retirement funds.

We have one of the best pensions and some of the best family healthcare provided to you and our members – and we aim to keep our great benefits.

We’re known throughout the region and the state as being a progressive powerhouse – not just because of our leadership – I, as an example, serve on the Sweetwater Union high School District Board of Directors, and on the California State Association of Electrical Workers, the Vice President of the San Diego and Imperial Counties Labor Council and the San Diego Building Trades Council, Board Member the Electrical Training Alliance, the Secretary Treasurer of the National City Park Apartments Association, and on the Statewide LMCC – but also because of the work you do in the community.

Like our EWMC members conducting weekly outreach to youth in our local schools – or the members of the newly formed RENEW Committee who are making sure we create opportunities for the next generation of electrical workers, or our new ALIANZA group that is engaging with Latino communities throughout San Diego and Imperial Counties.

Our long term goals are to:

I want to thank our Executive Board for their tremendous work to keep our union strong. Each of them volunteers countless hours to make sure IBEW stays strong and our members get the benefits, recognition, and representation you deserve.

I also want to thank our IBEW 569 staff.  Much of our accomplishments are attributed to their hard work.  We’ve got some of the best minds on our staff, and they are dedicated to growing our union and getting more work for our members.

2018 was a great year and we’re heading into 2019 as a stronger Local thanks to YOU and your hard work! We’re going to need your help to keep our momentum going. By continuing to rely on one another as our family, and showing solidarity, we’ll get more work for our members and continue being the best in the industry. 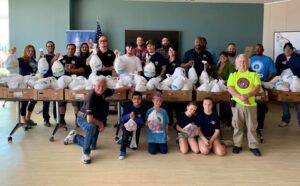 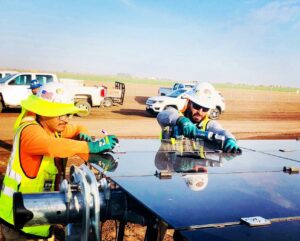